Since 2018, Lutheran Village at Miller’s Grant has been fortunate to have Andrew Ogen as a team member. He is easily recognized by the big smile he wears upon greeting visitors and team members. His calm and friendly 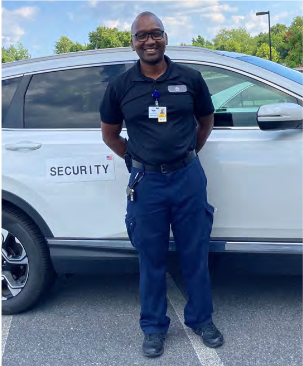 Ogen was born in Uganda, a country located in East Africa. Uganda won its independence from the United Kingdom in 1962 and has since had a series of repressive governments. His father was assassinated in 1992 for smuggling arms to rebels who were fighting for democracy. At the time, Ogen was 14, the eldest of six children.

By 2005, he began receiving threats from the Ugandan government because he was in the “wrong” political party (i.e. the Uganda Peoples Congress). Using his mass communications and marketing degree, he became a journalist for “The Observer,” a Ugandan newspaper. He wrote a column exposing the governments’ suppression of democracy. After receiving the threats, he fled Uganda to spend time in Kenya and Australia.

He eventually moved to Laurel, MD, where he has family; however, his wife and children, ages two, four and 15, remain in Uganda, but visit him when they can.

After settling in his new home, Ogen Googled “jobs near me” and found his way to Miller’s Grant. He feels he landed in the right spot, “I love this place. I view it as my other home,” said Ogen. He continued to say, “I’m not actually working, just helping someone I know.”

His perspective and warm disposition is why he was awarded Miller’s Grant’s first VIP award for demonstrating the core value, respect. An excellent choice!